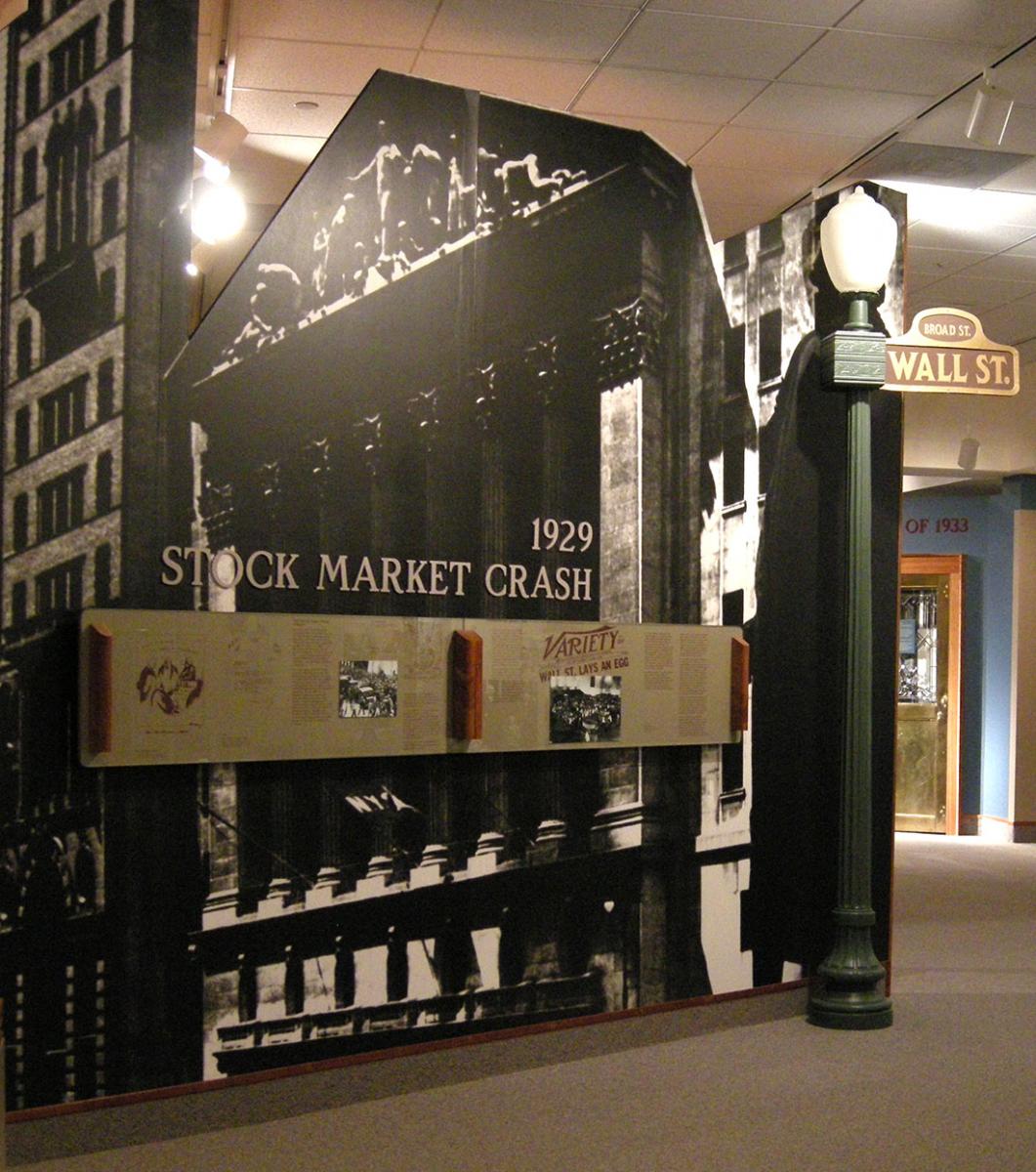 The 1920s were a period of optimism and prosperity – for some Americans.  When Herbert Hoover became President in 1929, the stock market was climbing to unprecedented levels, and some investors were taking advantage of low interest rates to buy stocks on credit, pushing prices even higher.  In October, 1929, the bubble burst, and in less than a week, the market dropped by almost half of its recent record highs.  Billions of dollars were lost, and thousands of investors were ruined.

After the stock market crash, President Hoover sought to prevent panic from spreading throughout the economy.  In November, he summoned business leaders to the White House and secured promises from them to maintain wages.  According to Hoover’s economic theory, financial losses should affect profits, not employment, thus maintaining consumer spending and shortening the downturn.  Hoover received commitments from private industry to spend $1.8 billion for new construction and repairs to be started in 1930, to stimulate employment.

The President ordered federal departments to speed up their construction projects and asked all governors to expand public works projects in their states. He asked Congress for a $160 million tax cut while doubling spending for public buildings, dams, highways, and harbors.

Praise for the President’s intervention was widespread;  the New York Times commented, “No one in his place could have done more. Very few of his predecessors could have done as much.”  Together, government and business spent more in the first half of 1930 than in the entire previous year. Still consumers cut back their spending, which forced many businesses and manufacturers to reduce their output and lay off their workers.

In October 1930, with unemployment rising, Hoover created the President’s Emergency Committee for Employment (PECE) to coordinate state and local relief programs, and to develop methods for increasing employment in the private sector.  But with no direct control of funding for relief or jobs, PECE had only limited success.

As the Depression worsened, Hoover requested that the Federal Reserve increase credit, and he persuaded Congress to transfer agricultural surpluses from the Federal Farm Board to the Red Cross for distribution to relief agencies. Hoover asked Congress for even more spending on public works, and he continued to encourage states and private businesses to generate new jobs.

Economic conditions improved in early 1931 until a series of bank collapses in Europe sent new shockwaves through the American economy, leading to additional lay-offs.  In August 1931, PECE was reorganized as the President’s Organization on Unemployment Relief (POUR). POUR expanded on PECE's work but also implemented a national fund drive for unemployment relief.  The national fund drive raised millions of dollars but proved to be woefully inadequate as unemployment soared to record levels.

Hoover was criticized for almost every program he proposed.  His public works projects, designed to create jobs, were characterized as wasteful government spending.  His efforts to promote local relief programs, rather than asking Congress to create nationwide relief programs, were viewed as callous disregard for the unemployed.

On January 22, 1932, Hoover established the Reconstruction Finance Corporation (RFC) to make emergency loans to businesses in danger of default.  At first the RFC lent money only to banks, railroads, and certain agricultural organizations, but the scope of its operations was later expanded, and it proved to be an effective tool for stabilizing business and industry.  In July 1932, Hoover signed into law the Emergency Relief Construction Act, which allowed the RFC to lend $300 million to the states for relief programs and $1.5 billion for public works projects.  Hoover also persuaded Congress to establish Federal Home Loan Banks to help protect people from losing their homes.

By the summer of 1932, the Great Depression had begun to show signs of improvement, but many people in the United States still blamed President Hoover.  With the Presidential election approaching, the Democratic candidate, New York Governor Franklin D. Roosevelt, exuded hope and optimism, and promised the people a "New Deal."  Hoover, defending his record, came across as pessimistic and defeated.  In November, Roosevelt won in a landslide. 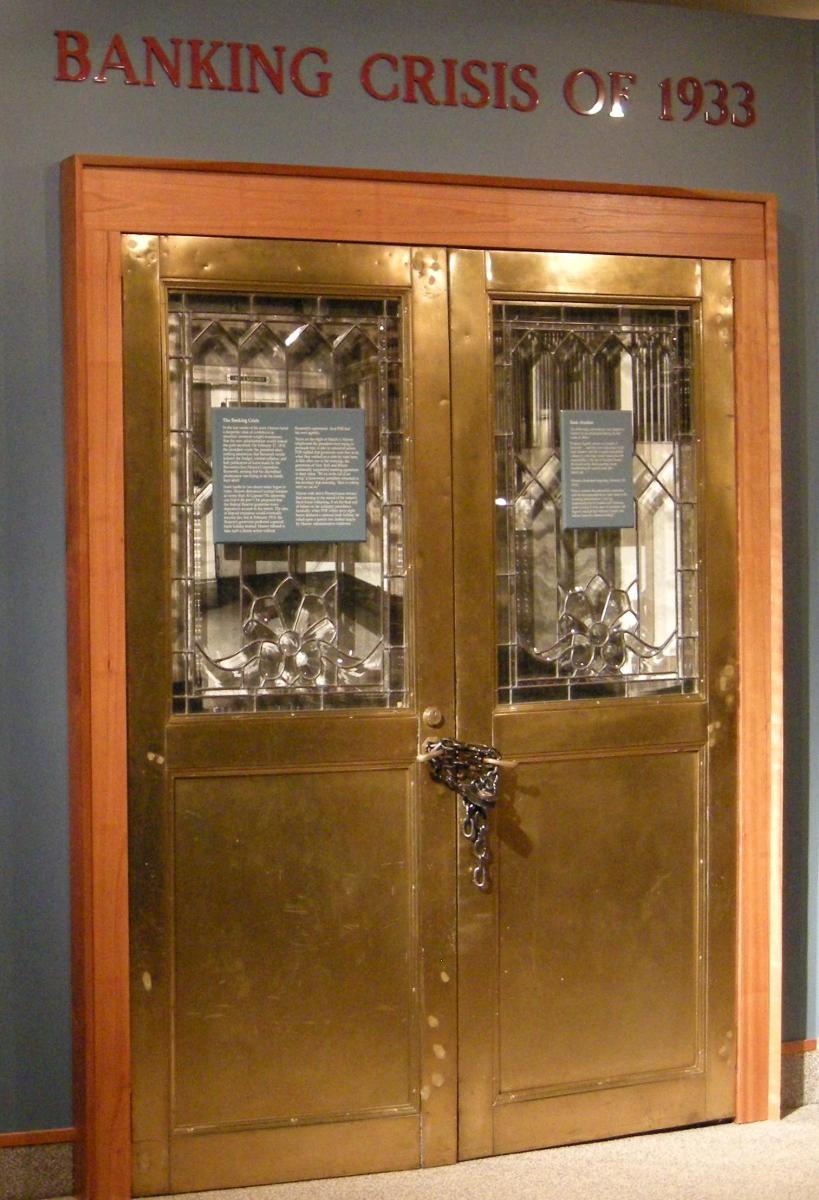 Four long months intervened between the election and Roosevelt's inauguration. Economic signs that had looked so promising in the summer of 1932 trended downward, unemployment went up, and banks failed at an alarming rate.  As weak banks closed their doors, nervous depositors began withdrawing cash from even the soundest banks, but Congress refused to enact Hoover’s plans to stem the panic.  When Roosevelt was inaugurated on March 4, 1933, the banking system was near total collapse, and unemployment had reached 25%.  Within days, Congress passed and FDR signed into law the Emergency Banking Relief Act, which stemmed the panic and restored confidence in the financial system – and was almost identical to legislation Hoover had proposed weeks before.  Despite all the efforts of Roosevelt's "New Deal," the Depression persisted seven more years, until World War II stimulated the economy with increased demand for commodities and war materials.