Bellhaven Behoover (Glen), a Collie.  Given to Lou Hoover by Florence B. Ilch, owner of Bellhaven Collie Kennels of Red Bank, N. J., in November 1928 at the age of eight months. Apparently, Glen did not get along with other dogs at the White House and was given to Mrs. Cora Newton, the wife of Herbert Hoover's secretary, Walter Newton.  AKC #666082

Big Boy, a wirehaired fox terrier.  Big Boy arrived as a Christmas present from someone in Virginia, Christmas, 1929 and was given to the sons of George Akerson, one of Hoover’s secretaries.

Buckeye, a Belgian Police Dog [Malinois?]  A gift to the Hoovers in June 1928, just after Mr. Hoover was nominated for President, from Gertrude Leavitt Hanna, whose family was prominent in Ohio politics.  Mrs. Hanna's assistant inadvertently sent Buckeye's sister Mahana along at the same time.  Mahana ran away and was never found.  Buckeye moved to the White House with the Hoovers in March 1929.  Mentioned in several letters in early 1929, subsequent fate unknown.

Cragwood Padraic (Patrick I), a wirehaired Irish Wolfhound.  Presented to Lou Hoover on March 30, 1929 by Mrs. Norwood B. Smith, a former schoolmate.  Patrick passed away shortly after arrival of an infection.  AKC #665207

Cragwood Padraic II (Patrick II), a wirehaired Irish Wolfhound from Mrs. Norwood B. Smith to replace the deceased Patrick I.  Patrick arrived at the White House in August, 1929.  A newspaper report in June 1930 described Patrick as “sensitive, shy and shaggy, claims Mrs. Hoover as his closest friend."  Apparently he proved too shy and Mrs. Hoover traded him back to Mrs. Smith for Shamrock (below).  AKC #694432

Cragwood Seamrog (Shamrock), another wirehaired Irish Wolfhound.  Given to Lou Hoover around December 1930 by Mrs. Norwood B. Smith, apparently because Patrick II was too shy around strangers.  In 1931 Shamrock became too aggressive around strangers and bit one of the Marine guards at Camp Rapidan.   Mrs. Hoover gave him to a soldier at Ft. Myer who volunteered to take him, who later gave him to Col. Wrisley Brown.  AKC #736131

Ch. Inglehurst Gillette (Gillette), a Gordon Setter and a prizewinner at the Madison Square Garden show.  Presented to Hoover by Colonel William J. Donovan on Inauguration Day.  Shortly afterward, he was given into the custody of a Dr. Mann, Superintendent at a nearby zoo, apparently because the dog barked too much.  Gillette was photographed with the other White House dogs and received tags in the summer of 1930.  Subsequent fate unknown.

King Tut, a Belgian Police Dog [Malinois?].  Herbert Hoover’s favorite.  The Hoovers acquired Tut from a friend around 1922, when he was probably one or two years old.  Tut moved with them to the White House but was unhappy, so the Hoovers sent him back to their former S Street house, which had been rented by Connecticut Congressman Frederic Walcott and his family.  Tut died in October 1929, though the Hoovers did not make the fact public for several months in order to avoid a deluge of donated dogs.

Pat, a German Shepherd or Belgian Malinois, was a gift to the Hoovers from Captain Charles J. Mabbutt of Fort Benning, GA.  Given to Hoover in May 1930 as a replacement for King Tut, Pat liked to patrol the White House grounds. He went to Palo Alto with the family after Hoover's presidency.

Ronnie Av Glitre (Weegie) a Norwegian Elkhound was a gift from the American Elkhound Association in February 1931 to replace King Tut.  Originally named “Norway” or “Norrie” for short, the Hoovers' granddaughter, Peggy Ann, called him "Weegie" and it stuck.  Weegie went to Palo Alto with the Hoovers after the Presidency and was later given to Elizabeth Hanna, a family friend, ca. 1941.  AKC # 929110

Ch. Southboro Markham (Mark), an English Setter presented to Hoover in September 1929 by Mr. D. C. Kok of Palo Alto, CA, a family friend.  The dog was a national and international champion.  No further information.

Whoopie, a Schnauzer given to the Hoovers by Frances Dillmann of Chicago in March 1929.  Because Whoopie seemed discontented with life in the White House, Lou Hoover gave the dog to Mrs. Norwood Smith when she brought Padraic I to the White House.

Northern Light Yukon? (Yukon), a Siberian Husky.  A 1929 gift from Fairbanks, Alaska.  He didn’t adjust well to the warm Washington climate and was sent to Canada during the summer months.  He was later given to an unidentified friend living in a cooler climate.  AKC #765694

Billy Possum, a wild opossum that strayed onto White House grounds.  Adopted by the Hoovers, it was kept in the pen built for the Coolidges' raccoon.  Billy was adopted by a Maryland high school that had recently lost their opossum mascot.

Kitty, a Persian cat given to Lou Hoover shortly after the inauguration.  Was reported to have "the freedom of the corridors" in the White House; subsequent fate unknown.

Allan's Alligators:  Sometime in the early 1920s, Allan Hoover acquired two young alligators that he kept in the bathtub of the Hoover home on S Street in Washington DC.  In 1922, he donated the alligators to the Smithsonian.

Sunny Boy, a pedigreed cat, which won second prize in the Washington Cat Club competition in February, 1927.  Mrs. Hoover acquired Sunny Boy from a Mrs. Whittemore in late 1926 or early 1927.  There is no evidence that Sunny Boy lived at the White House.  No further information. 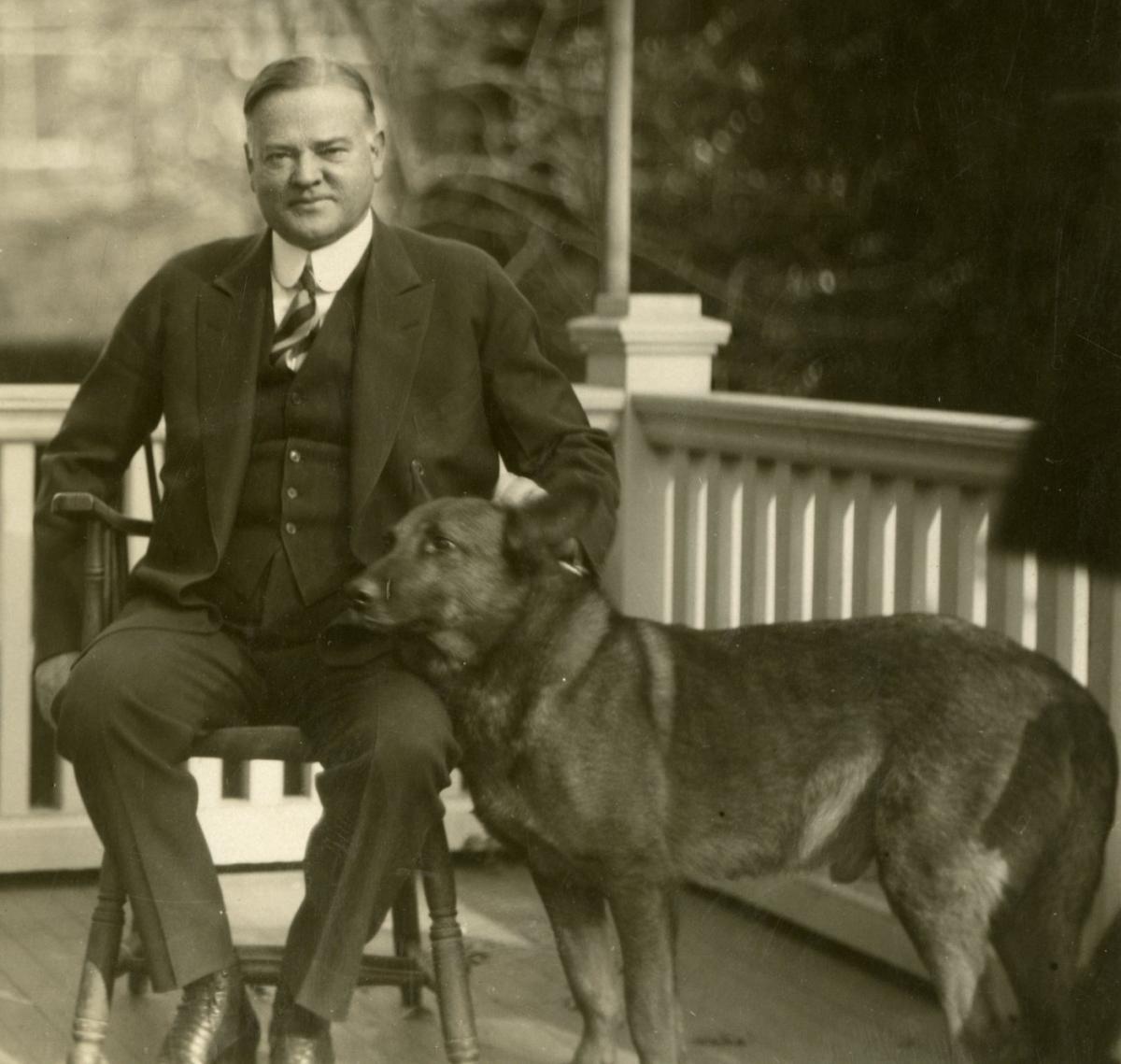 Secretary of Commerce Herbert Hoover with his dog, King Tut, at his Washington DC home. 31-1928-f11

Secretary of Commerce Herbert Hoover with his dog, King Tut, at his Washington DC home. 31-1928-f11 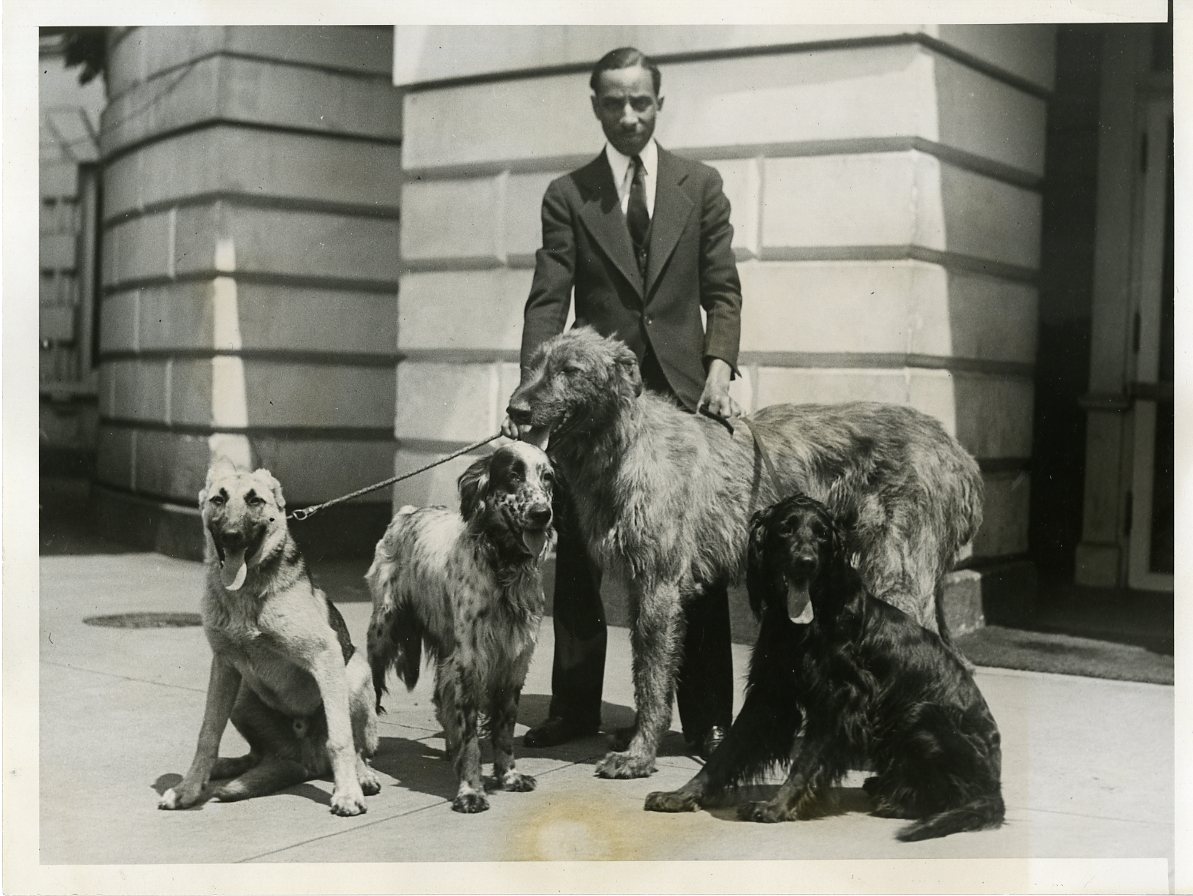 President and Lou Hoover in the White House gardens with Pat and Weegie (Pat has the ball). 06/15/1932

Harry Waters, master of the White House dogs, with the President's four pets, who are left to right: "Pat" a German police dog, "Marks" an English setter, "Patrick" a wire haired Irish wolfhound, and "Inglehurst Gillette" a Gordon setter.