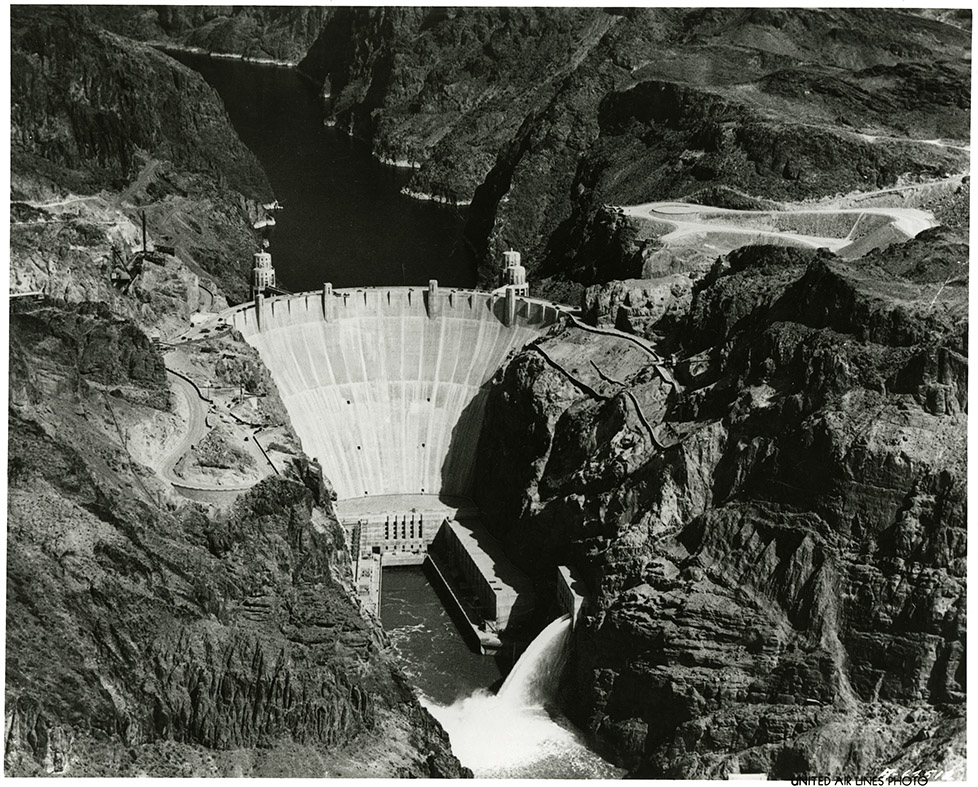 Eighty-five years after its completion, Hoover dam is still considered an engineering marvel. It is named in honor of President Herbert Hoover, — who played a crucial role in its creation.

For many years, residents of the American southwest sought to tame the Colorado to prevent flooding and provide irrigation to transform the arid region into fertile cropland. The greatest obstacle to constructing a dam was the issue of water rights allocation among the seven states of the Colorado River drainage basin. It became evident after meetings held at San Diego, Tucson, Salt Lake City, Los Angeles, and Denver that a formal agreement for the equitable apportionment of the water between the states was needed.

Herbert Hoover had visited the Lower Colorado region in the years before World War and was familiar with its problems and the potential for development. Upon becoming Secretary of Commerce in 1921, Hoover proposed the construction of a dam on the Colorado River. In addition to flood control and irrigation, it would provide a dependable supply of water for Los Angeles and Southern California. It would recover its cost through the sale of the hydroelectric power it generated.

When the commission assembled in Santa Fe in November 1922, the seven states still disagreed over the fair distribution of water. The upstream states feared that the downstream states would be allocated the vast majority of the water due to their rapidly developing agricultural and power needs. Hoover suggested a compromise that the water be divided without individual state quotas. The resulting Colorado River Compact was signed on November 24, 1922. It split the river basin into upper and lower halves with the states within each region deciding amongst themselves how the water would be allocated.

Bills calling for Federal funding to build the dam were introduced by Congressman Phil D. Swing and Senator Hiram W. Johnson between 1922 and 1928, all of which were rejected. The final Swing-Johnson bill, titled the Boulder Canyon Project Act, was largely written by Hoover and Secretary of the Interior Hubert Work. The bill passed on December 18, 1928 and President Herbert Hoover signed a proclamation on June 25, 1929 making the Compact effective.

Appropriations were approved and construction began in 1930. The dam was dedicated in 1935 and the hydroelectric generators went online in 1937.  In 1947, Congress officially "restored" Hoover's name to the dam, after FDR's Secretary of the Interior tried to remove it. Hoover Dam was built for a cost of $49 million (approximately $760 million adjusted for inflation). The power plant and generators cost an additional $71 million. The sale of electrical power generated by the dam paid back its construction cost, with interest, by 1987.

Today the Hoover Dam controls the flooding of the Colorado River, irrigates to over 1,500,000 acres of land, and provides water to over 16,000,000 people. Lake Mead supports recreational activities and provides habitats to fish and wildlife. Power generated by the dam provides energy to power over 500,000 homes. The Hoover Compromise still governs how the water is shared. 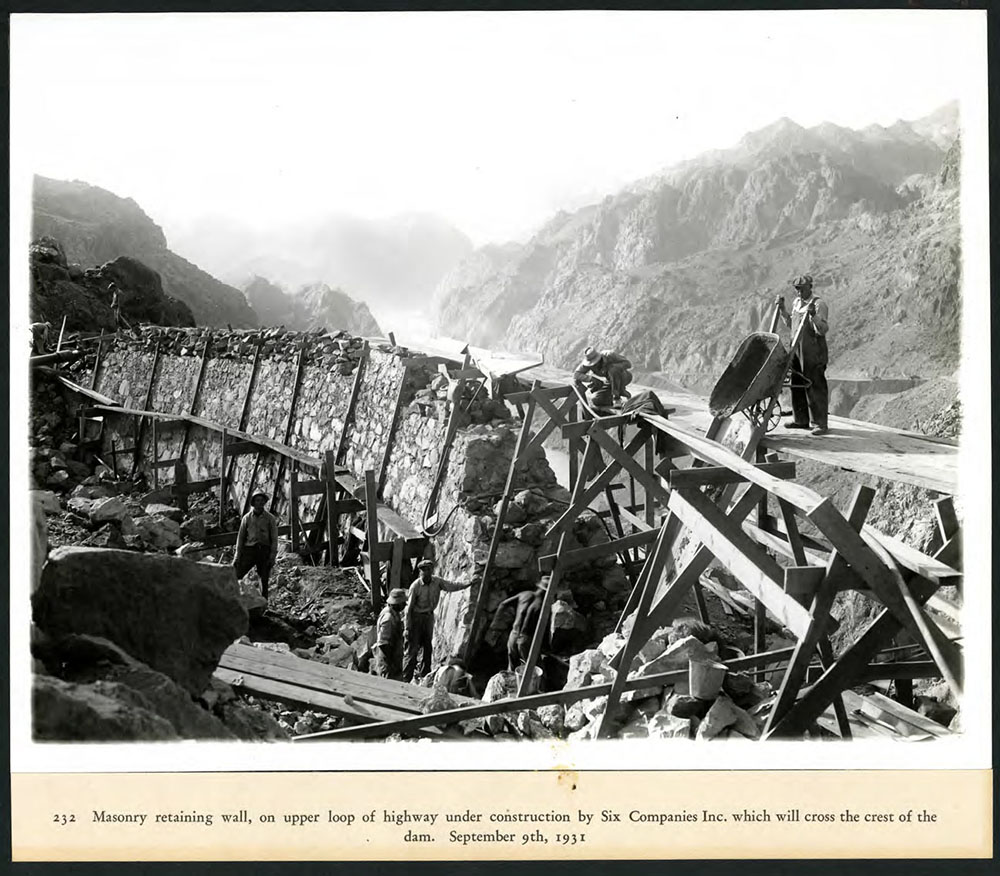 Workers on the Job

Several boats are used for transporting men, powder and supplies up and down the canyon. 01/19/1932

First-aid station and ambulance located at the river camp above the portals. A similar hospital is maintained at the lower portals. 03/08/1932

Workers at isolated points away from drinking fountains are supplied by desert water bags. The picture shows a crew of "' water boys" at the Arizona spillway. 07/14/1932

High scalers perched on a bench 1,000 feet above the river prepare anchorages from which workmen will be suspended by ropes in scaling the canyon walls for the penstock tunnel adits. 08/22/1932

High scaling activities, in connecton with the excavation on the Nevada abutment to Hoover Dam. 01/27/1032

Excavating in the prehistoric bed of the Colorado River. 04/30/1933

The second millionth yard of concrete being placed in Boulder Dam. 06/02/1934

The run-around, excavated in the old top heading adit, to facilitate handling concrete  for No. 4 Plug. 03/04/1935

On crest of Boulder Dam, looking towards the Nevada side, showing final pour in the slot, which practically completes the concrete in Boulder Dam. 05/29/1935

View from the Nevada utility tower of Boulder Dam, showing the Memorial Day exercises in connection with the unveiling of the plaque commemorating the men who gave their lives in the construction of Boulder Dam. 05/30/1935

Masonry retaining wall, on the upper loop of the highway under construction by Six Companies, Inc., which will cross the crest of the dam. 09/09/1931 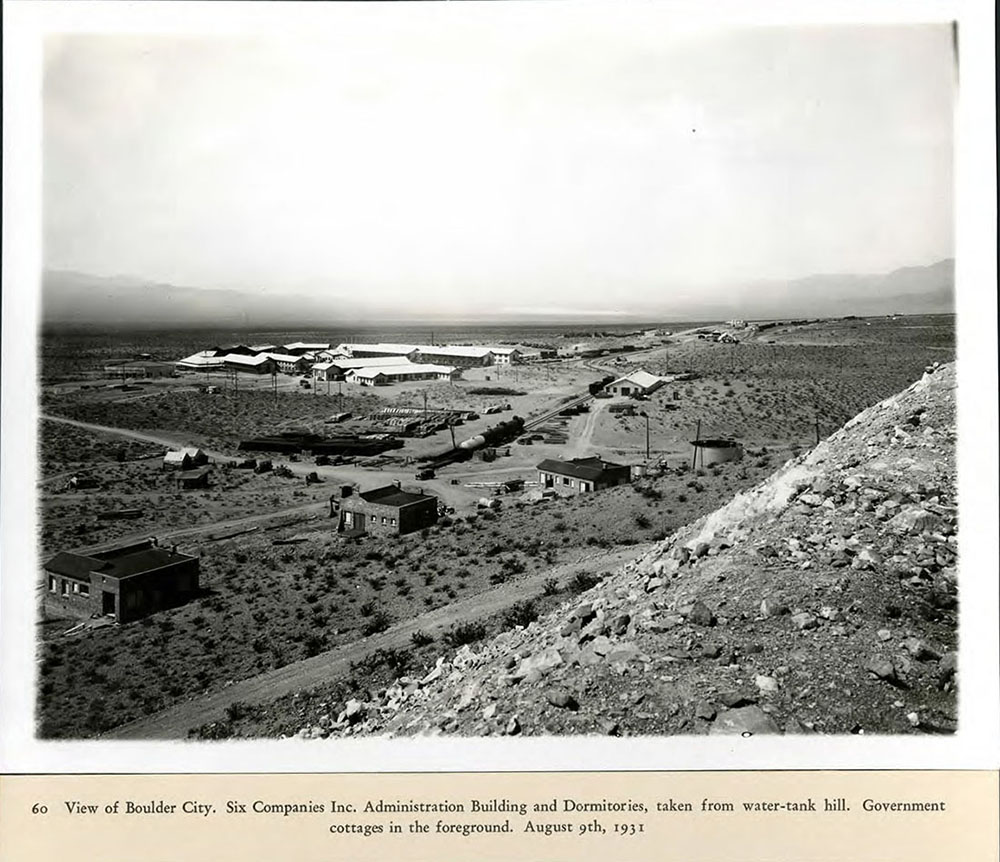 Prior to the advent of cold weather, the canyon workers were transported to the job from Boulder City in buses. This view shows the Swing Shift ready to leave from Dormitory No. 2. 11/07/1931

Types of cottages erected by Six Companies Inc. for their married employees at Boulder City. 01/07/1932

Transport trucks holding 48 men used for hauling workers to and from the canyon lined up after breakfast for the day shift. 07/20/1932

The men are paid on the 10th and 25th of each month. This view shows men from the swing shift lined up at the Paymaster's window to receive their checks. 01/25/1932 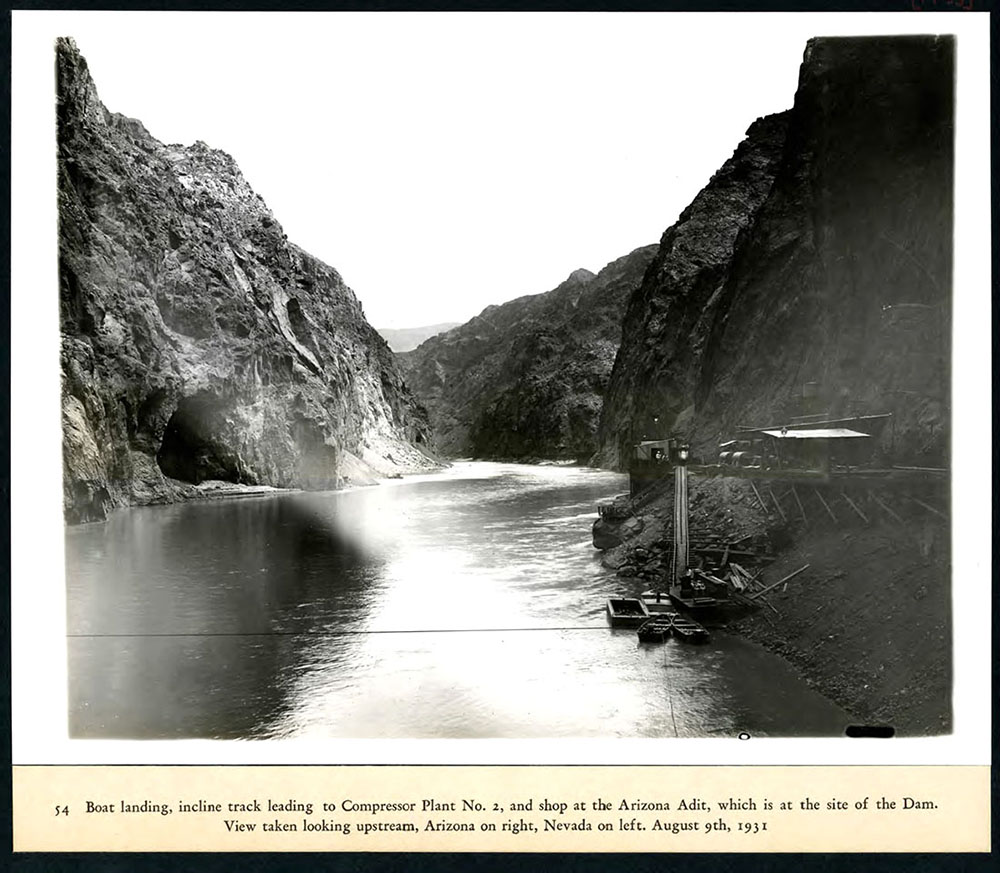 Another view of construction of Government Highway which will cross the crest of the dam. 08/10/1931

Temporary cable-way spanning the Colorado River, near Look Out Point, providing access to the Arizona spillway operations shown in the background. 04/01/1932

Looking across the reservoir area, which will be submerged when Hoover Dam is completed. The flat-topped hill in the center of the picture will form a small island and the ridge in the foreground will be totally submerged. 08/15/1932

Boat landing, incline track leading to Compressor Plant No. 2 and shop at the Arizona Adit, which is at the site of the Dam. View taken looking upstream, Arizona on the right, Nevada on the left. 08/09/1931 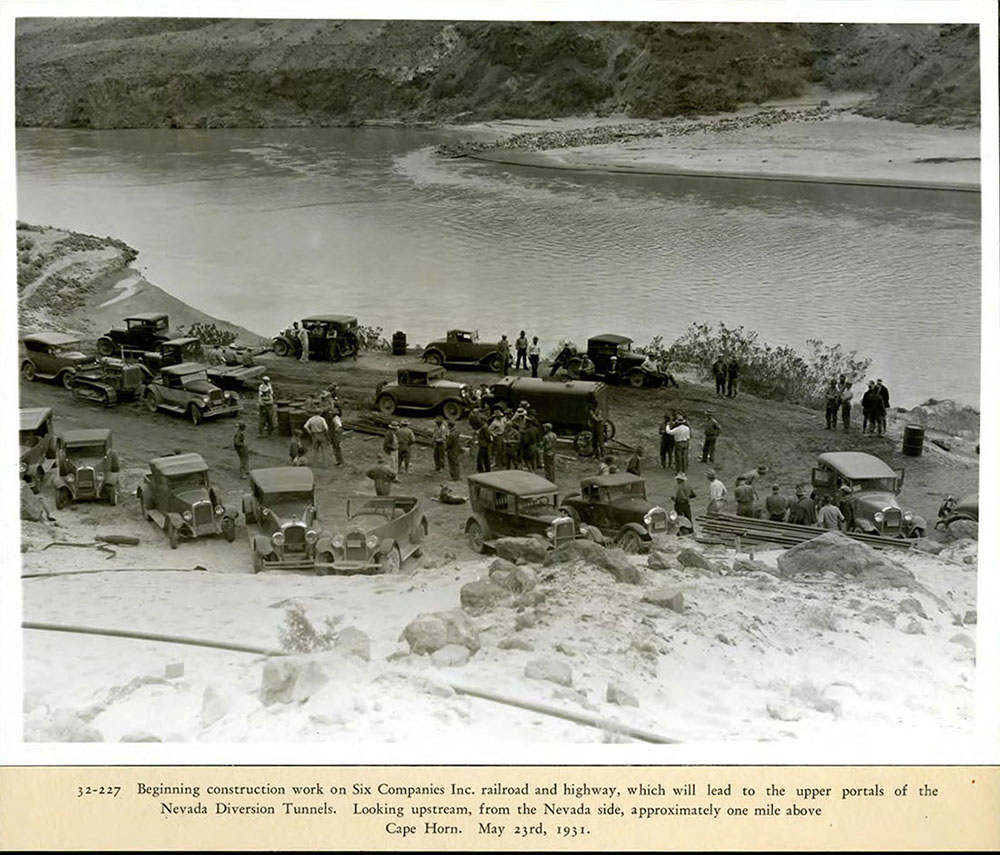 Laying a six-inch air line across the first suspension bridge. Arizona cliffs in background. This view is taken approximately one quarter mile upstream from the site of the upper portals of the diversion tunnels. 05/22/1931

Upstream steel suspension bridge, under construction. This bridge is supported by eight 2-inch cables, and will be used first for transporting excavated muck from the diversion tunnels. 01/01/1932

Dumping materials at temporary pile bridge to complete the diversion of the Colorado River. 11/13/1932

Union Pacific "Train of Tomorrow" on the Lomax trestle, at the upstream face of Boulder Dam, where the concrete is transfered from the Lomix trains to the dam. 03/09/1934

Track layout above Himix and Cement Blending Plants, showing bins where rock and sand are dumped. 04/17/1934

Beginning construction work on Six Companies Inc. railroad and highway, which will lead to the upper portals of the Nevada Diversion Tunnels. Looking upstream, from the Nevada side, approximately one mile above Cape Horn. 05/23/1931 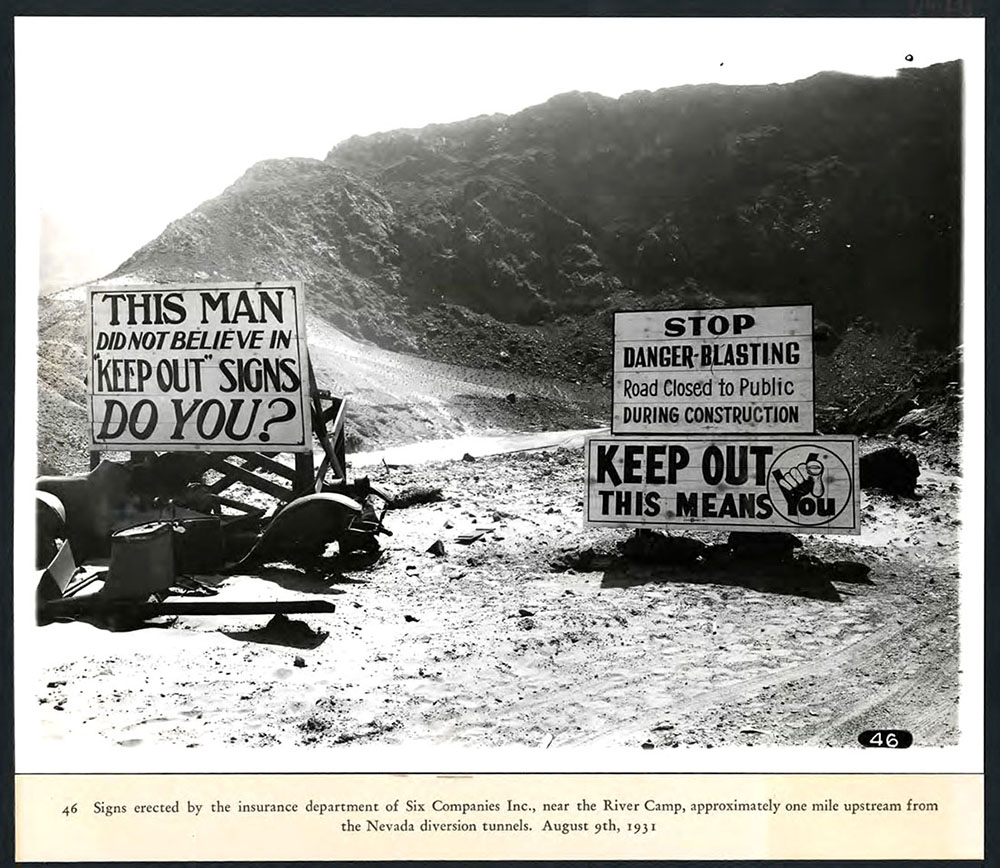 The first step in driving the 56-foot diameter diversion tunnels on the Hoover Dam project was the construction of pilot tunnels. These are 12x12 feet and were later enlarged to the full diameter of 56 feet. 08/26/1931

The concrete arch coffer dams are being blasted out of the lower portals of diversion tunnels. View shows Diversion Tunnel No. 2. 05/15/1932

Detail view of construction of steel form for lining the arch sections of the diversion tunnels. 06/10/1932

Apparatus devised for drilling grout holes through the concrete lining of the diversion tunnels. Air drills are mounted on bars. The grouting jumbo travels on rails laid on the invert floor. 07/23/1932

Nevada Inclined Spillway Tunnel leading down into Diversion Tunnel No. 1. 09/28/1932

Looking upstream in No. 2 Diversion Tunnel, showing the concrete pipeline from the pumpcrete gun to the upstream plug. 10/30/1934

Signs erected by the insurance department of Six Companies, Inc., near the River Camp, approximately one mile upstream from the Nevada diversion tunnels. 08/09/1931 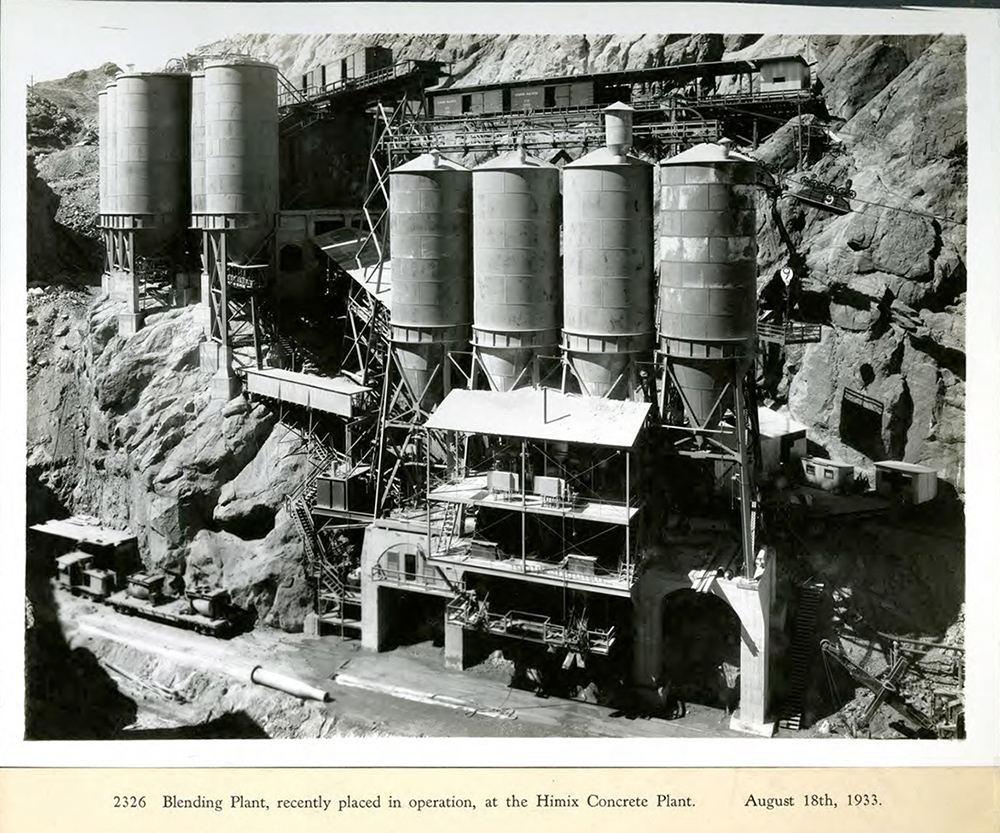 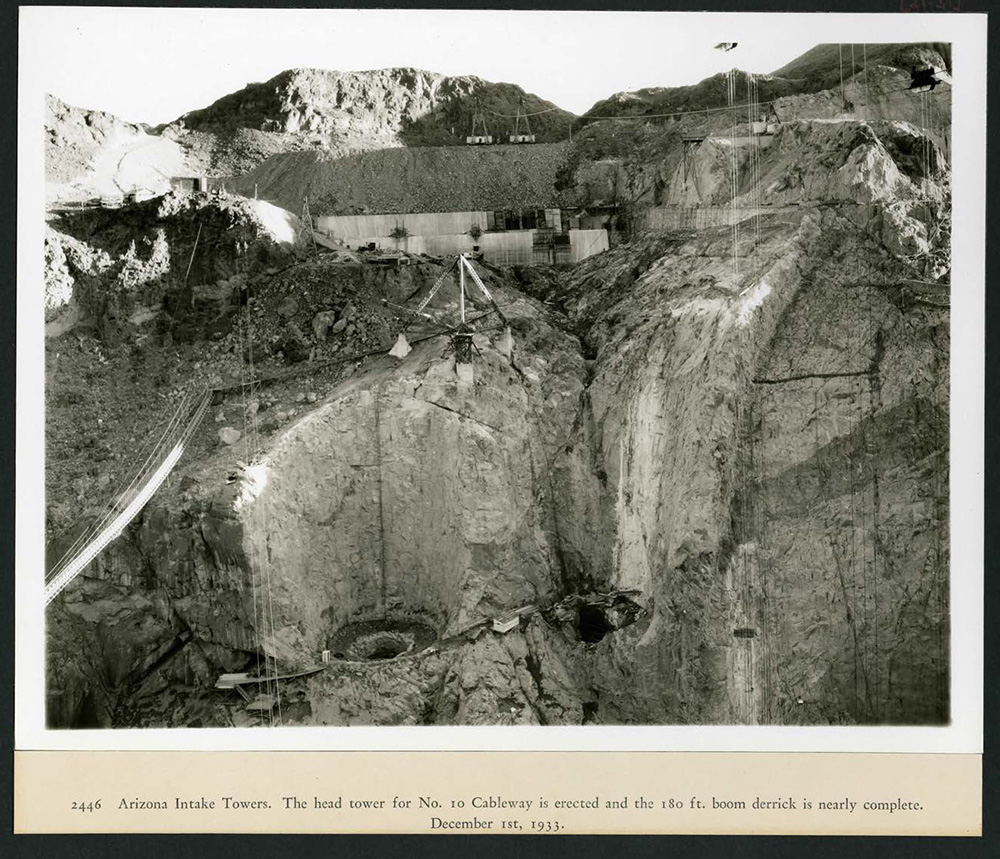 View taken from Himix Trestle, showing the Arizona Intake Towers and the Arizona Spillway in background. 04/27/1935

Looking downstream from the Nevada side, toward the upstream face of Boulder Dam, showing the Spillways, Arizona Intake Towers and Cableways. 08/17/1934

Looking from the Arizona side, toward the Nevada side, all four Intake Towers, 3 derricks, Boulder Dam to the left and the Nevada Spillway on the right. 09/27/1934 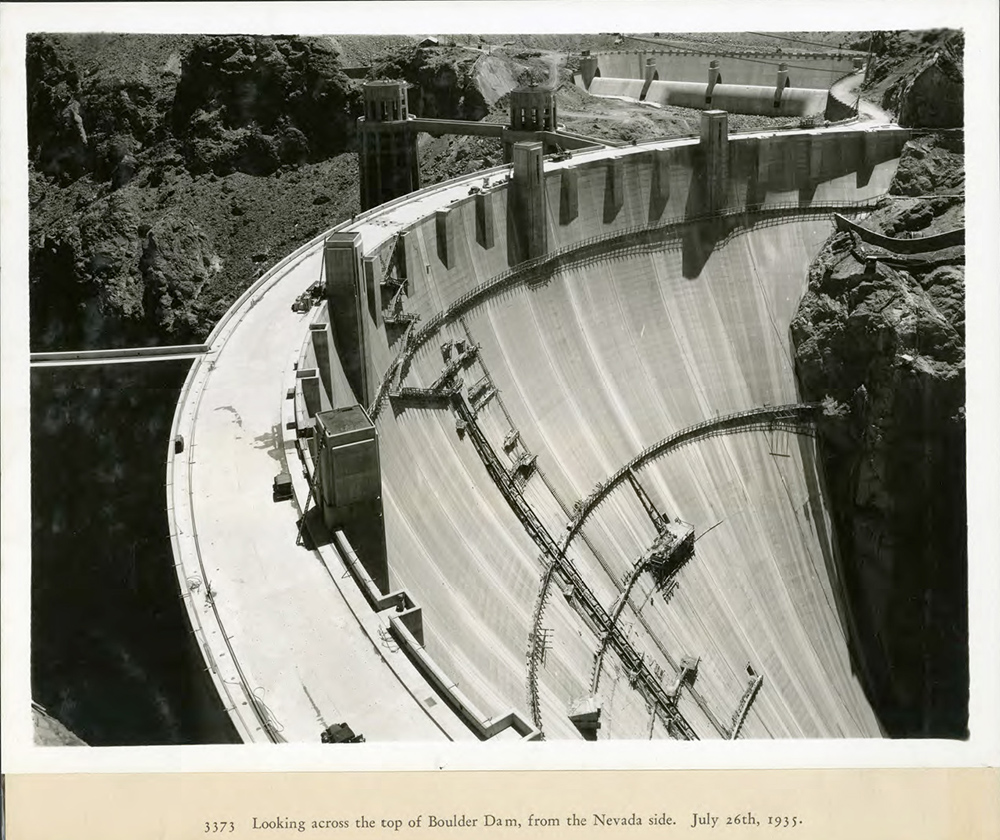 Looking down on Boulder Dam, showing the finished roadway and the Intake Bridge girders in place.  03/25/1935

View of the Power House Turbine Gallery, elevation 643, looking downstream on the Arizona side. 04/10/1935

View from the top of Boulder Dam, looking down on the Power House Structure. 04/25/1935

Looking downstream from the Arizona side of Black Canyon, showing the reservoir level at the base of Intake Towers. 06/24/1935