A World of Thanks:
World War I Belgian Embroidered Flour Sacks

The History of Flour Sacks 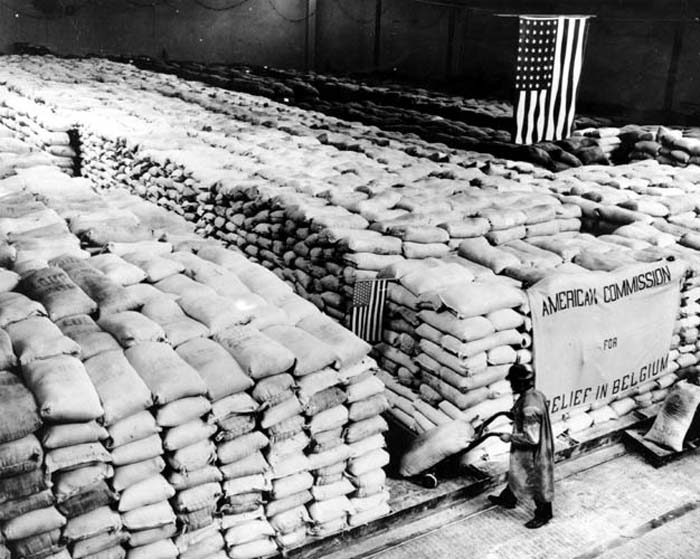 Sacks of white flour imported from America by the American Commission for Relief in Belgium waiting for distribution. ca.1916

Sacks of white flour imported from America by the American Commission for Relief in Belgium waiting for distribution. ca.1916

The Commission for Relief in Belgium (CRB) was established in October 1914 under the direction of Herbert Hoover to provide food relief to Belgium. The CRB fed millions of people in Belgium and occupied France between 1914 and 1919 by raising money, obtaining food, shipping the food past the British naval blockade and German submarines, and overseeing the distribution of the food by the Comité National de Secours et d'Alimentation.

The CRB shipped 5.7 million tons of food to Belgium. The flour was packaged in cotton bags by American mills. The movement of these bags in Belgium was monitored by the CRB since cotton could be used in the manufacture of German ammunition. The empty flour sacks were distributed to professional schools, sewing workrooms, convents, and artists.

Professional schools trained women to sew, embroider textiles, and make the famous Belgian lace. Large sewing workrooms were established in Belgian cities to provide work for thousands of unemployed. The flour sacks were made into clothing, accessories, pillows, bags, and other functional items.

Some chose to embroider over the mill logo and the brand name of flour, others created original designs on the sacks and then embroidered, painted, or stenciled on the fabric. Design elements included: messages of gratitude, lace embellishments, Belgian and American flags, lions, roosters, eagles, and symbols of peace. Some artists used the sacks as canvas for oil paintings. The Belgium population has two primary ethnic groups, the French speaking Walloons and the Dutch speaking Flemish. Many designs in the embroidered and painted flour sacks reflect the differences between the two cultures.

The modified flour sacks were distributed to organizations in Belgium, England, and the United States, and then sold to raise funds for food relief and to aid prisoners of war. Some were given as gifts of gratitude to members of the CRB. Herbert Hoover was given several hundred of these decorated flour sacks as gifts. The Herbert Hoover Presidential Library-Museum has one of the largest collections of World War I flour sacks in the world. 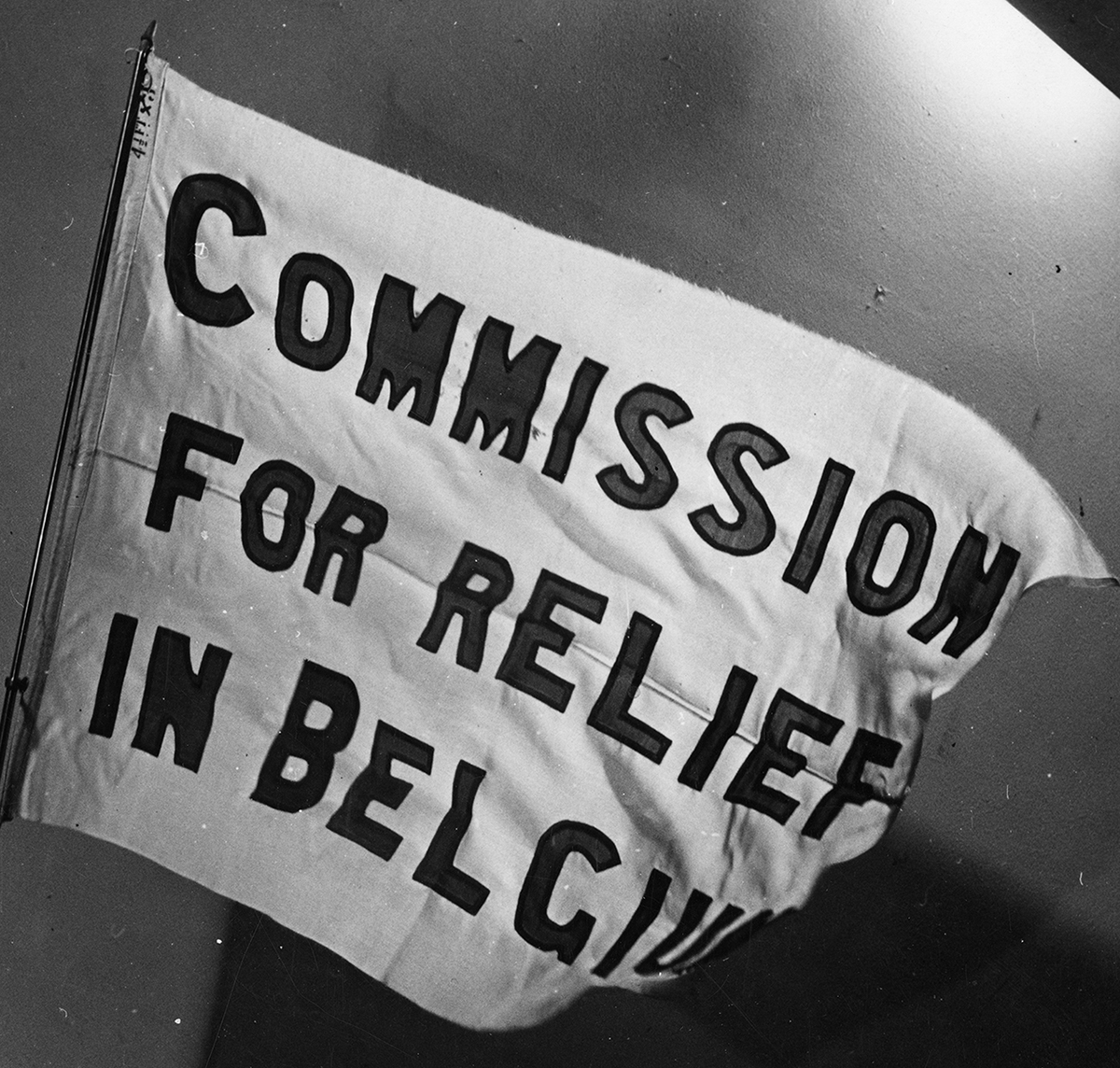 Commission for Relief in Belgium

A letter from President Woodrow Wilson to Herbert Hoover. 09/20/1915

In Brussels, sacks of white flour and cases of condensed milk are ready for distribution. ca. 1916

Paris shops decorated their windows with souvenirs made by the Belgians from the sacks of flour sent to them by the Belgian Relief Committee. These souvenirs were sold to raise money to help the Belgian people. ca. 1919

In Paris, before soldiers returned to the United States they would shop for souvenirs. The lampshade in this picture was make by Belgians from the flour sacks that were sent to them by the Belgian Relief Committee. The money made from the sale of these items helped provide food for the Belgian people. ca. 1919

Commission for Relief in Belgium, 1915. 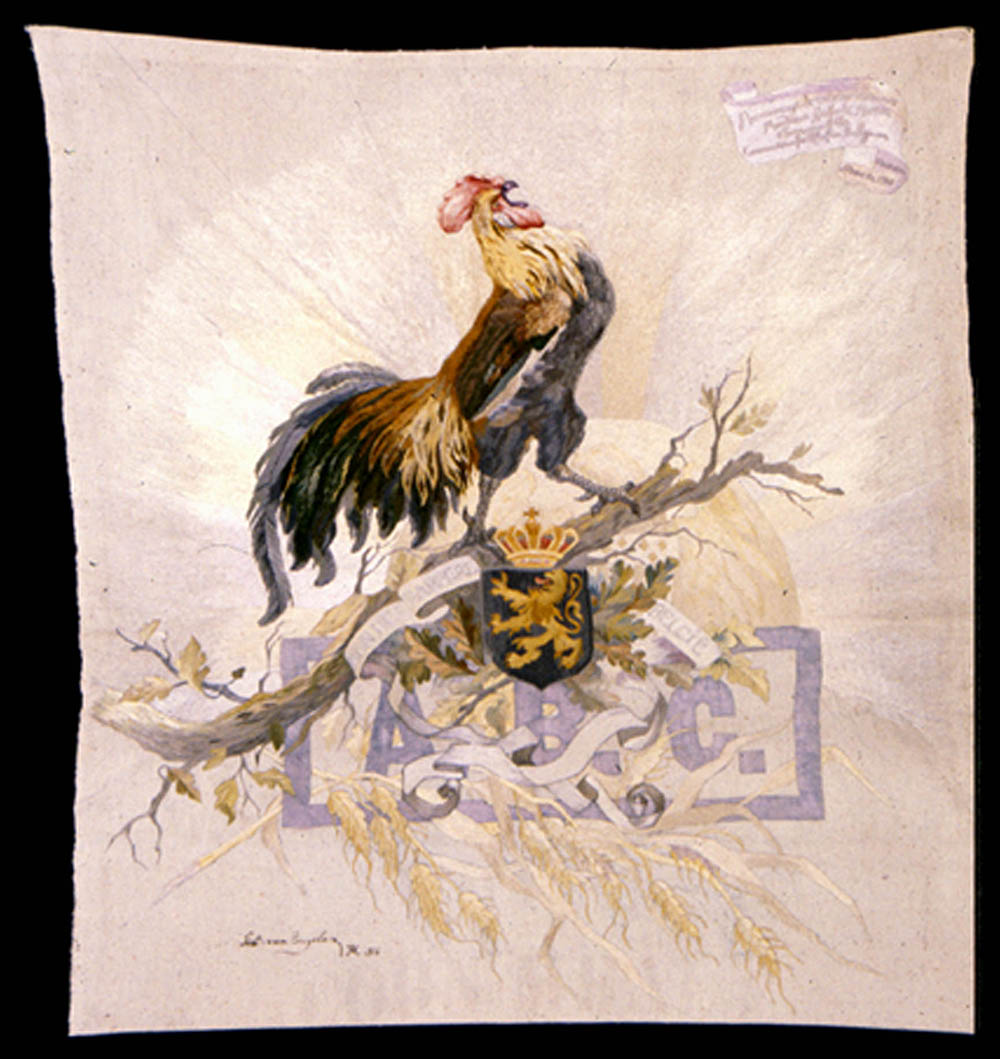