Christmas with the Hoovers

A Merry Christmas from the Hoovers

Herbert Hoover was at home on six continents. As a young mining engineer, Herbert Hoover's travels spanned the globe. Later, as the "Great Humanitarian," he directed food relief in more than three dozen nations. Not surprisingly, he and his family experienced Christmas in a wide range of settings. One holiday he spent in the Gobi Desert. Another Yuletide found him on a steamer navigating the Suez Canal; another year he and Mrs. Hoover ministered to wartorn Belgian victims of World War I. Whether celebrating at home or abroad, the Hoovers experienced many different customs and traditions.

Herbert Hoover remembered fondly a Christmas from his childhood when he was about ten years old. After his parents died, young Bert had been sent to live with his Aunt Millie and Uncle Allan and their children on a farm outside of town. Although Quakers do not usually celebrate Christmas, Bert’s aunt and uncle made sure he had something to enjoy. Uncle Allan took the children to chop down a pine tree in the woods by the Cedar River. Aunt Millie allowed them to make popcorn and then taught them to string the popcorn on thread to make garlands of "snow" for the tree. There was plenty of good food to be eaten, including fruit, nuts, and sorghum molasses popcorn balls.

A Cornish Christmas in California

Shortly after graduating from Stanford in 1895, Hoover worked in the gold mines of Grass Valley, California. While there he spent Christmas with a Cornish miner’s family and they feasted on Cornish pasties - a hand-held pie of meat and vegetables surrounded by a crust. Because these miners were noted for their singing, Hoover may have enjoyed the singing of traditional Cornish carols as well.

Herbert Hoover spent Christmas of 1897 in Kalgoorlie, Australia. In the barren Outback, Christmas was little celebrated and since the holiday occurs in the middle of summer, Australian Christmas traditions vary from those celebrated in the Northern Hemisphere. Ferns, palm fronds and orchids were used to decorate instead of the holly and mistletoe. Christmas bushes substituted for trees and Santa’s reindeer were replaced with white kangaroos.

Hoover described Christmas Day in Australia as a “Maximum hot day…We had little of the Christmas ceremonies. There were no pine trees and eucalyptus is no substitute!”

Herbert and Lou spent their first Christmas together in Tientsin, China along with a contingent of other “foreigners:” British, French, and other Americans. According to Hoover, “There being Pine trees, we had our first joint Christmas in 1899, where Mrs. Hoover insisted upon the ancient rites for ourselves and the neighbor children.”

Among the “ancient rites” practiced, the Hoovers sent and received Christmas cards from their neighbors in Tientsin. 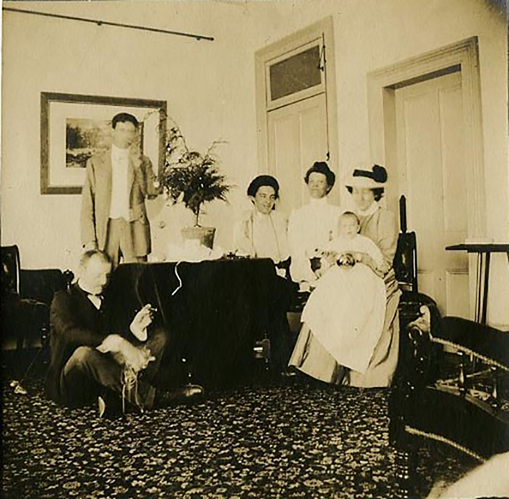 In August 1903, the Hoovers welcomed into the world their first child, Herbert Hoover Jr.  At barely one month old, baby Herb, his parents and a nurse left London for the land down under, where the proud father spent the next several weeks inspecting his company's mining properties in Australia and New Zealand.  Like every young family, the Hoovers were eager to celebrate Baby's First Christmas, but when the day arrived they found themselves at a hotel in Auckland, New Zealand, so the Hoovers borrowed a potted plant from the hotel lobby to serve as a Christmas Tree.  Later that afternoon, the family boarded the ocean liner "Sonoma" and sailed for California.

The Christmas Spirit During the War

With the outbreak of World War I the Hoovers became involved with relief efforts, especially in Belgium. On Christmas Eve 1914, they attended a dinner at the American Legation given by the U.S. Minister. On Christmas Day Lou attended services at the Cathedral of St. Michael and St. Gudule, and afterwards she and Herbert spent the day at a friend's home. There, with a big tree in the hall, they helped distribute food, clothing and toys to 660 children.

Christmas on the High Seas

President-elect Herbert Hoover and his wife Lou on deck of the USS Utah during the Goodwill Tour of Latin America. 12/28/1928

President-elect Herbert Hoover and his wife Lou on deck of the USS Utah during the Goodwill Tour of Latin America. 12/28/1928

Herbert and Lou Hoover spent Christmas 1928 on board the battle ship USS Utah on their return home from the Goodwill Tour. They were treated to the best that the crew had to offer beginning on Christmas Eve with hundreds of sailors singing carols on deck. Christmas Day opened with religious services and ended with an elaborate dinner. Under a full moon the deck was converted to a summer garden and holiday setting. Japanese lanterns swung over the tables, which were decorated with fresh Brazilian flowers and strings of evergreens. A fireplace with mantel and chimney was constructed at one end of the deck and painted to look like brick. Red electric globes gave the appearance of glowing coals. Following dinner, the Hoover’s son, Allan, played Santa and with the help of Lou’s secretary, they distributed gifts.

As President and First Lady, the Hoovers participated in many public ceremonies. Privately, they held intimate celebrations with close friends. 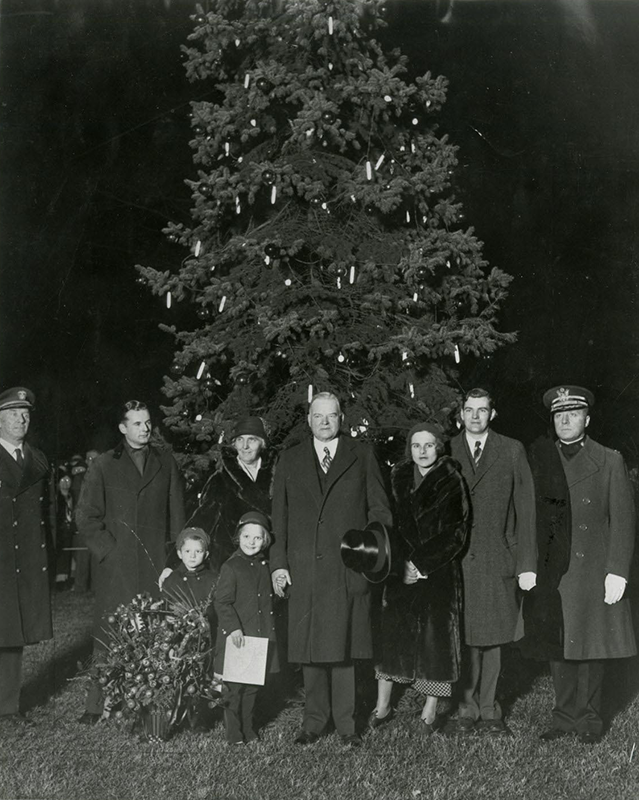 President Hoover and his family in front of the nation's Christmas tree, Sherman Square. 12/25/1931

President Hoover and his family in front of the nation's Christmas tree, Sherman Square. 12/25/1931

On Christmas Eve 1930, a party was hosted by the Hoovers’ grandchildren. The following is an excerpt from a letter that was written by press secretary George Akerson's wife, Harriet:

After guests had greeted their hosts, all were given cards to match up and find their dinner partners. After dinner, brass bells were passed out to the men and boys and copper candlestick with lit red candles were handed to the ladies. The President holding granddaughter Peggy-Ann’s hand and Mrs. Hoover with grandson Peter, led the march through the darkened White House rooms in search of Santa Claus. As they went up the grand staircase “we each pulled a red cord hanging from above and it gave a real chime and did blend in exquisitely with the bells…the men and boys were ringing…It was a joy to see the beaming faces of all from the President down to the smallest child.” 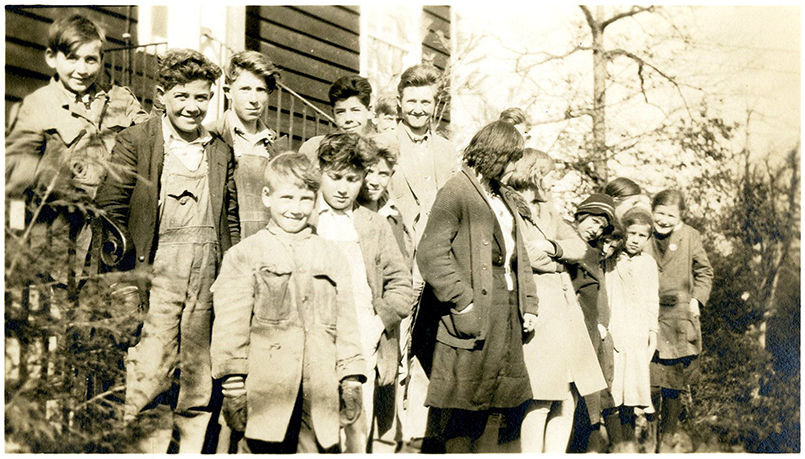 Rugged mountaineers go to school in the winter time at the President's School, near Camp Rapidan in Virginia. ca. December 1931.

Rugged mountaineers go to school in the winter time at the President's School, near Camp Rapidan in Virginia. ca. December 1931.

Camp Rapidan was President and Mrs. Hoover’s mountain retreat, located 100 miles from Washington, D.C. Because the camp was closed between November and April, the Hoovers never celebrated Christmas in the mountains. However, embodying the spirit of the holiday season, they found a way to help the children who lived on the mountain and attended the President's Mountain School.  The Hoovers provided flour, sugar, coffee, clothing, gloves, hats, and scarves, as well as toy dolls, trains, balls, and horns to celebrate the holiday season.

Lou, the Girl Scouts and Christmas 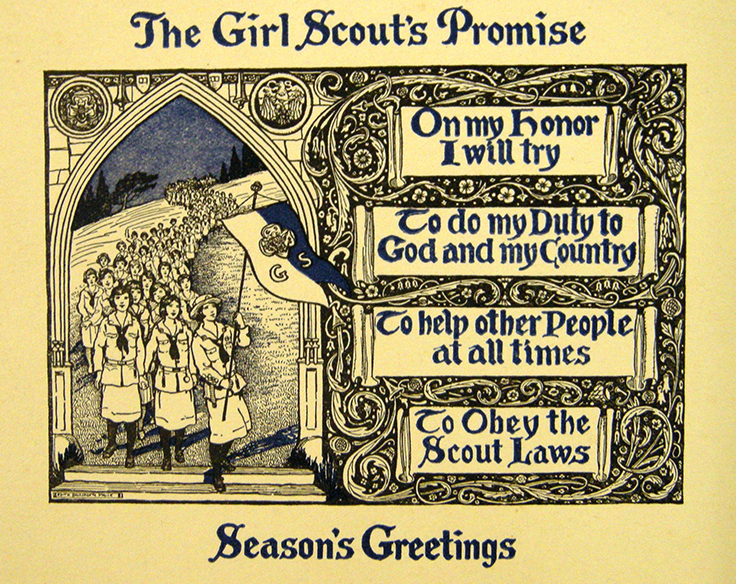 The Girl Scout organization was very important to Lou Hoover. She was personally recruited in 1917 by founder Juliette Gordon Low to be Acting Commissioner in Washington, D. C. She served the organization in various capacities for the rest of her life. Even at Christmastime she incorporated the Girl Scout’s pledge as part of her season greetings.

Christmas in Apartment 31-A

Former President Herbert Hoover in his home In New York during the Christmas season. ca. December, 1952.

Former President Herbert Hoover in his home In New York during the Christmas season. ca. December, 1952.

Even after Lou died in 1944, Herbert Hoover continued to enjoy Christmas. Observing the Quaker tradition of having friends and neighbors on Christmas Eve, he annually hosted a dinner in his Waldorf apartment.

In 1952, an associate remembered one such gathering. “In the hall was a table covered with Christmas cards… scores of gifts of flowers were about; roses, poinsettias…” and a huge Christmas tree “bedecked with hundreds of colored baubles and covered with gay tinsel” stood in the living room corner with “gaily colored” gifts underneath it.

“Dinner consisted of a soup, a fish…roast turkey with…trimmings and ice cream in the form of Santa.” Each guest found a gift at their place setting as well. After dinner the ladies retired to the living room and the men talked around the table. Eventually, all gathered together for quiet conversation until the party broke up.